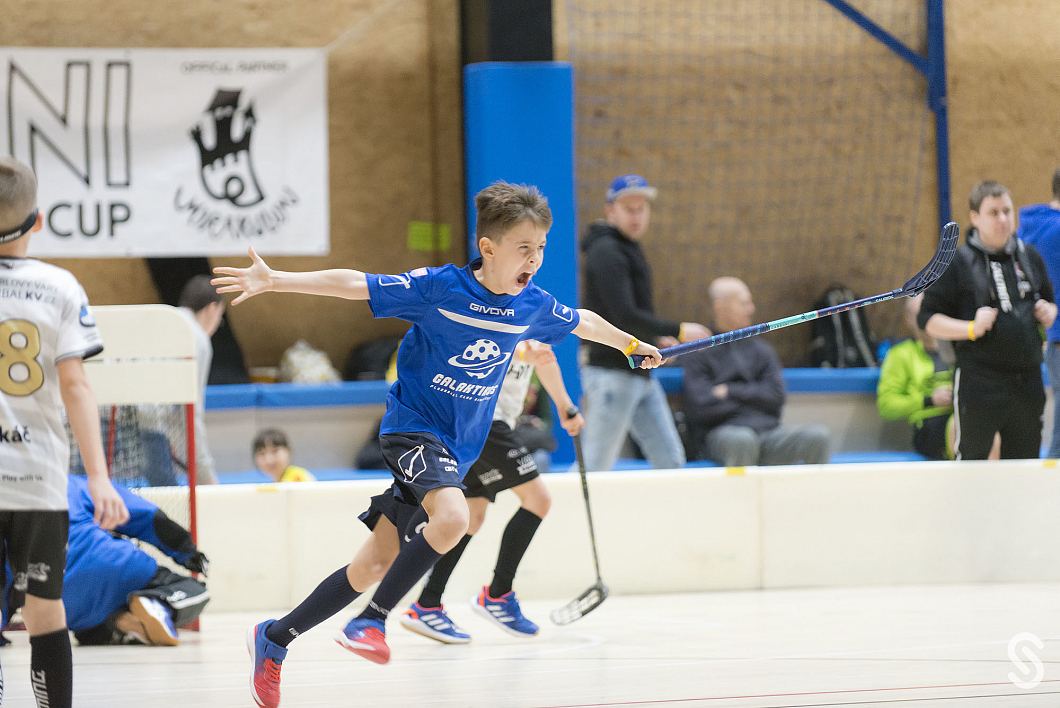 PFC mini has become an inseparable part of the Prague Floorball Cup. Over the last years, there has been a growing interest in this special competition where the youngest players (categories B10, B11 and G08, G09) compete against each other but most importantly spend a weekend full of fun.

We are glad that last year, PFC mini became an international competition as we hosted several teams from abroad, including Latvia, Germany and Poland. No doubt international matches in 3 plus 1 tournament for these age categories are a rarity and we are more than happy to provide the kids who are starting to play floorball with this precious opportunity.

PFC mini takes place in a separate area that reminds of an “Olympic village”. The Charles University sport center (SCUK) in Prague-Hostivař traditionally belongs to the youngest players and provide all necessary facilities for them as well as for their families and coaches.

Last year on PFC mini, amongst other teams from abroad, we hosted little players from the Latvian team Lekrings lead by Pauls Erenbots, who also plays for the Latvian national team. They travelled all the way from Latvia to compete in B10 category and showed us some great floorball. It is not a secret that Pauls is a huge admirer of the city of Prague and he never misses an opportunity to come here either as a player or a coach. We asked him about his impressions from the Prague Floorball Cup 2020.

Hello Pauls, we are glad you participated in the Prague Floorball Cup 2020. Why did you decide to take your team there?

I found out about Prague Floorball Cup 2020 through Instagram tournament advertisements. I thought that it would be a great opportunity for my new floorball players to play in a higher level and that it would also teach them to be more independent.

Prague is quite far away from your home country. How was your journey to the tournament?

I must say a big thanks to the parents who helped us get to Prague. We drove with two minibuses. The boys were excited about the idea of participating in a tournament and about the chance to go on a trip together, that is why they behaved themselves really good throughout the whole journey.

What I liked most about PFC mini was the high level of the game and the individual technique of the young floorball players from your country. And the tournament was organized very professionally, there were no slip-ups.

What is your strongest experience from the tournament?

It was an amazing experience for me us a new coach and definitely, an unforgettable life experience for the little floorball players. Since the tournament, my guys have been even more motivated in the training process. It was a good steppingstone to new goals.

Can you tell us something about the way of raising young floorball players in Latvia?

We also practice MINI floorball in Latvia 3+1 up to the age of nine. Frome the age of ten we play 4+1, but from the age of eleven we play on the big floorball court 5+1. I think that the youth floorball is developing and starting to get very competitive against the Top4 (CZE, SWE, FIN, SUI). Coaches are more educated and experienced than ever before and as a result, we can give more to the new players. I believe that in the near future the Latvian national team will fight for medals in the World Floorball Championship.

Are you planning to participate again in 2021?

We will definitely try to use this opportunity. It is even possible that we would celebrate the New Year in Prague because it takes us 22 hours to get there and we would not like to have a celebration in our minibuses. It would be much better to welcome the New Year in a beautiful city like Prague and after that participate in a good floorball tournament.

If you like to participate in the upcoming PFC mini competition that takes place from 2nd to 3rd January 2021, just fill in the registration form on our website. Also, don’t hesitate to ask us anything about the tournament.